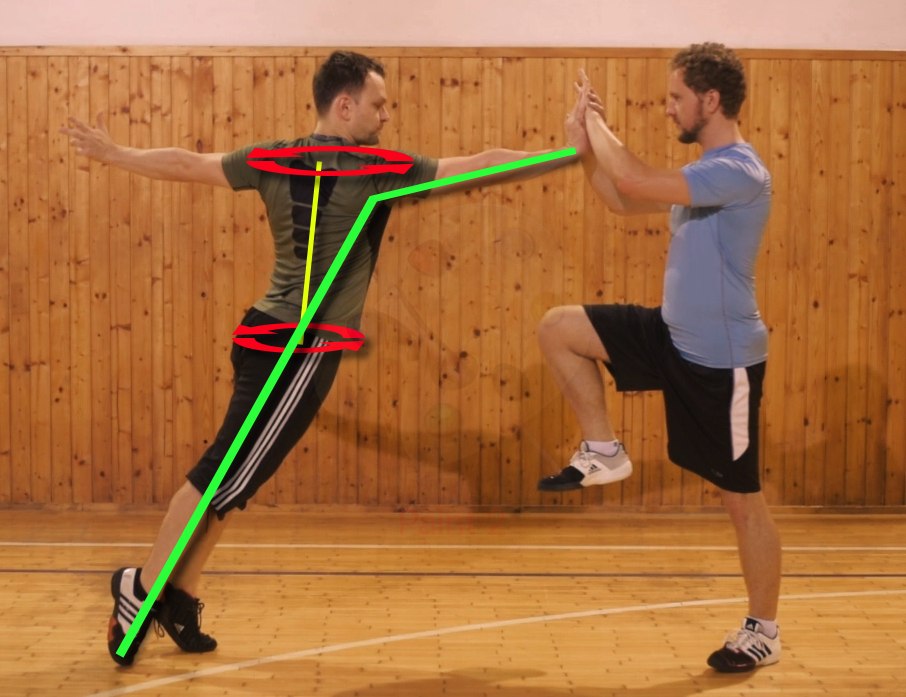 Today I would like to contribute something that has no real basis in historical sources and it is only a perception inspired by our training process. Maybe it will approach a few years or we give up the injury and extend beyond the fencing Trnava guild. I personally hope not artificial heresy, which the martial arts today unfortunately full. In recent years, we try to apply the rotation and motion mechanics in almost every technology that deeply explore. The reason is simple. We are neither the highest nor the strongest swordsman and therefore require some techniques against stronger opponents smarter approach that can wring the most out of the few. I have repeatedly been asked for advice on suitable exercises helpful in improving movement mechanics checks, points and other fencing events. Although often simply we are talking about rotation, but these are only part of a complex whole body movements. This new movement mechanics aims to streamline the generation and transmission of power throughout the body, ie from the feet from the ground to the tip of the sword. Based on the generalized practice, as you will see in the video, it can be similar mechanical principles applied in almost any technology.

attitude That these exercises ever made sense, it is necessary to put them on a solid foundation, and that is correct and stable position. For years we have gone through different forms of basic alert and we currently enshrined in a position that perhaps best promotes stability but even more readiness and freedom of movement. One of the most important features of this stance is upright position of the entire body. Center of gravity is suspended below the chest and feet are light. The body does not move in forward or to either Party at reversing the movement nor the efforts to improve range. The back leg heel off axis fencing and the sole is closed ahead. Thus, the spoke is not directed or backward perpendicularly to the axis of fencing as is common in sports such as fencing, but the forward direction. The angle of the feet can not be strictly prescribed but may also feel less than 45 degrees. Such location provides better pressure to the ground, and scroll feet (progressive imprinted to the tensioned spokes) respectively. opening joint ankle adds further impetus to the movement. If you use the angle of 90 feet or more degrees ankle it is already almost fully open, and hence its contribution to the movement and strength is significantly lower.

Another important element that may be it is not obvious just by looking at the video of the engagement side abdominal muscles. If these are not properly reinforced during movement, leg power is transmitted to the sword only to a small extent. And as a negative consequence comes even to presiľovaniu arms, which increases the likelihood of injury Remenno joints. Equally important is the involvement of the muscles of the back cross, which should not remain loose. Not only because of the power transmission legs to strike. Equally important is the prevention of back injuries had to deal with in detention.

The video should be obvious that comes to significant exchange parties. The right arm is getting ahead of the right side and left side, relative to him, backwards. This gives For checks, as well as Zorn and Schiller advantage that the body gets into register and therefore is a safer position.
Exercises
Rotation against an opponent to signal Static version: Trainer stands firmly hands and offers a flexible objective, to which the full force relies. I’m starting at left guard. The right hand and the pressure in the rear leg lifts pan over the front leg. Hand as striking point on the target. Stabilizes the shoulder and scapula down. Elbow retensioning is 100%. In this position, the maximum pressure will try to find the most comfortable storing arms, shoulders, torso, pelvis and legs up to the foot. The country relies on only one leg, and power is transmitted in a straight line up and over your shoulder forward. Whole body working in unison in one direction. Coach can help me by telling when and in what position generates the most pressure. This exercise can also practice against the wall but ideally the more flexible obstacle. It is therefore better partner that we at the end of pressure overrides back to guard. There appears if the arm with arm badly stored, for in this case comes to misalignment. Version moving forward: Coach sets the hand as a target and the signal falling instructor swordsman with rotation forward. The coach leans strongly against the incoming strike with full force and creates resistance, whether for a split second or longer. Exerciser trying to constantly move forward and pressure to push the opponent back. After the coach allow pressure will step back into the basic exerciser alert, only with the opposite foot forward. Then exercise continues on the other side. Ideally, the entire length of the gym. If the practitioner understands the process and mechanism, it is necessary to increase the resistance to the extent that it is unable to overprint play forward. Just then unconsciously it begins to engage the deeper inner muscles, which is more than desirable for improved performance. In the third exercise, the opponents from time to time just to simulate resistance on impact and allow sharply. Then the instructor swordsman must settle the situation and without dropping continue to move into the base alert. Dynamic variant of the reaction: The latest variant of this exercise is that the coach leads exercisers who must maintain constant spacing adequate movement in one guard. Randomly selects a signal swordsman shall respond with full force and rotation forward. Coach can vote again and false signals, at which transmits an incoming attack.
Individual exercise with a rubber rope. On lab we use a fixed rope with great resistance. If we hang it high above his head and rehearsing Oberhawové rotation. If you drink to ground level so the practice rotation for absetzen and so on. For spin on Zornhaw we hold the rope fist above his head back so that the hand is stretched, as well as rope. Shoulder and scapula are established below. Rotation start pulling along an imaginary axis fencing down. Rope stretches out with the least possible use of the hand muscles. We should not feel an excessive burden on the shoulder joint. Reprinted hand down to the position in front of the solar plexus, where bit longer. At this point, the muscles of the hand and released almost the entire position is reinforced through all the muscles of the torso. The final movement before and now move comes only from being pushed from the rear legs. When you exercise, I would refer you to the chapter on Zornort, it is an exercise that should help precisely this technique. Recent exercises shown in the video is similar to the previous exercise only the bottom up. This exercise improves the quality and strength Ochs points absetzen or Zwerchaw.